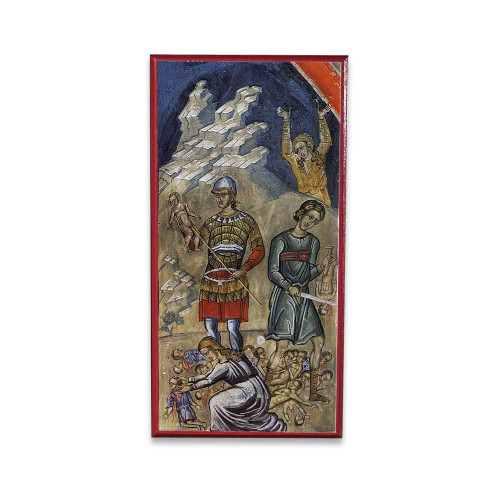 This infanticidal slaughter was ordered by Herod, who was afraid of losing power to the one called "King of the Jews" by the Magi. Soon after the birth of Christ, all the male children in the Bethlehem region under two years of age were murdered. Mary and Joseph escaped with Christ into Egypt.

These infants are counted among the martyrs who shed their blood for Christ in the first wave of persecution against Him. Saint Augustine notes that they did not just die for Christ, but they died instead of Him. For his part, Herod died a wretched death soon afterward.

In the background is a depiction of Rachel weeping for the children of Bethlehem, after the words of Jeremiah, "A voice is heard in Ramah, mourning and great weeping, Rachel weeping for her children and refusing to be comforted, because they are no more."

The Holy Innocents are commemorated on December 28 in the West, and December 29 in the East.