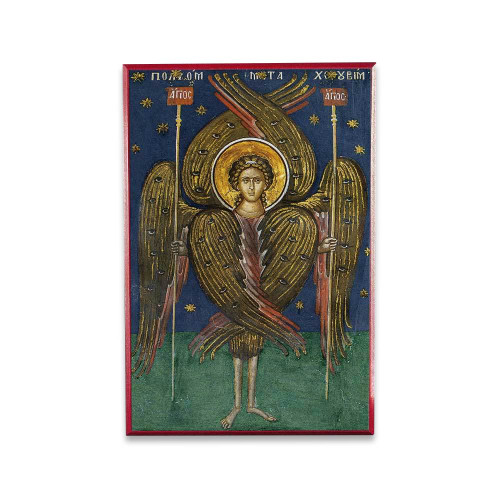 This detail from a large 16th century fresco features a Cherub. The Cherubim are the second-highest of the nine ranks of angels. The Ark of the Covenant fashioned by Moses, and later the Temple, depicted images of Cherubim. In the icon, the Cherub holds ceremonial fans which read "Holy, Holy," after the angelic song in Isaiah 6 and Revelation 4. He is depicted with six wings and covered with eyes, similar to the Seraphim.

In the middle of the Eastern Divine Liturgy, the Cherubic Hymn ushers in the celebration of the Eucharist. The hymn bids worshipers to imitate the Cherubim in their focused attention, "laying aside all earthly cares," as we approach the pinnacle of Christian worship.

The feast day of all the angelic hosts is November 8.