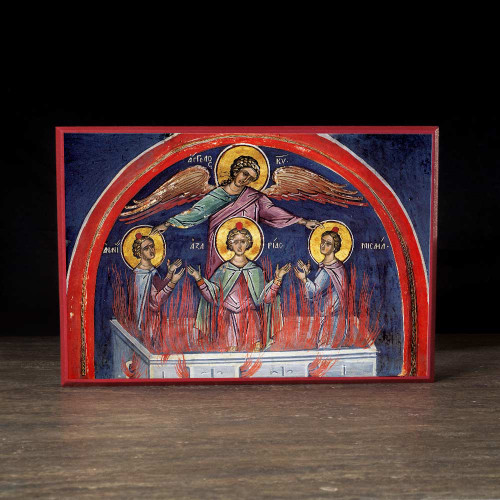 The Three Holy Youths Ananias, Misael, and Azarias were among the Jews who were taken to Babylon in the sixth century BC. King Nebuchadnezzar took them into his royal household where they served, along with the Prophet Daniel. They were given Persian names: Shadrach, Meshach, and Abednego.

When the king constructed a golden image of himself and commanded all the Babylonians to worship it, these three insisted they would worship God alone. So, the king had them thrown into a super-heated furnace. The youths were preserved by an angel who made the furnace as cool as dew for the youths, and they walked around in the fire, unharmed. Astonished, the king commanded the people to worship the God of Israel.

According to Church tradition, the "Angel of the Lord" was a manifestation of the pre-incarnate Christ, the Son of God. The account of the fiery furnace from the Book of Daniel, together with the Song of the Three Youths from the Septuagint version of the Old Testament, is read at the Vesperal Divine Liturgy on Holy Saturday—the last of 15 readings—as pointing to the Lord's descent into Hades and Resurrection.

The Three Youths, together with the Prophet Daniel, are commemorated on December 17.