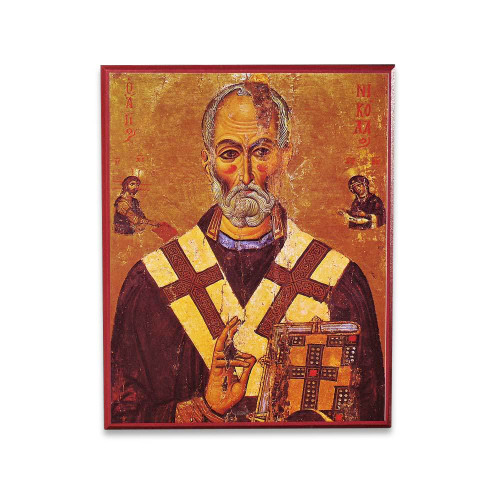 Saint Nicholas was born in the third century in the city of Patara. His wealthy Christian parents died when he was young, and he gave his inheritance to the poor. Devoting himself to the Church, Nicholas was eventually ordained Bishop of Myra.

In this position of responsibility, St. Nicholas proved himself to be extremely kind and generous. He is known today for using whatever resources he had to aid people in need, though during his life he was careful to keep his identity a secret. One of the most famous stories of his generosity tells of his tossing three bags of gold through the window of a poor man with three daughters. Nicholas gave enough to pay for the marriages of all three girls.

In his public life, Nicholas lived through the reign of the anti-Christian emperor Diocletian. Nicholas was imprisoned for his faith, but survived and was eventually released.

He attended the Council of Nicaea in the year 325, also called the First Ecumenical Council, where the Nicene Creed was drafted. There he famously stood against the heretic Arius, who taught that Jesus was a created being.

St. Nicholas is called “Wonderworker” for his many miracles. By his prayers and actions, famines were lifted, prisoners were set free, and diseases were healed.

At an old age, St. Nicholas died a natural death. He is commemorated on December 6. This icon was painted at the Monastery of Saint Catherine at Mount Sinai in the 13th century.