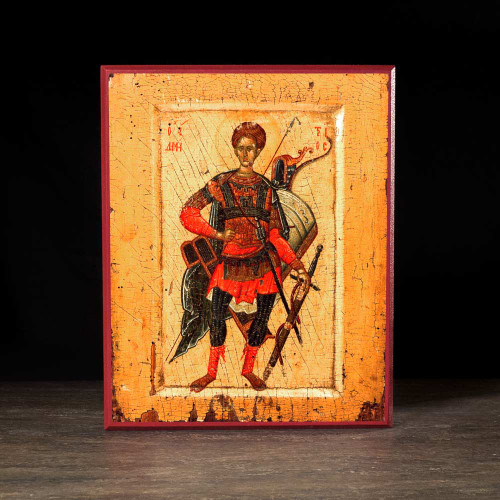 This 14th century icon depicts Saint Demetrius (or Demetrios), an early Christian martyr and important military saint. His feast is celebrated on October 26.

Saint Demetrius was born in Thessaloniki in the third century. He was a soldier in the Roman army and exhibited every Christian virtue. During the persecution of the emperor Diocletian, Demetrios was imprisoned. While in prison he spoke of his faith in Christ to everyone who would listen. Saint Demetrius was martyred in the year 296. It was discovered that his relics miraculously emitted holy myrrh (sweet-smelling oil), and a church was built over his grave. The church suffered destructive fires over the centuries, but it was always rebuilt and the Hagios Demetrius church remains in Thessaloniki to this day.