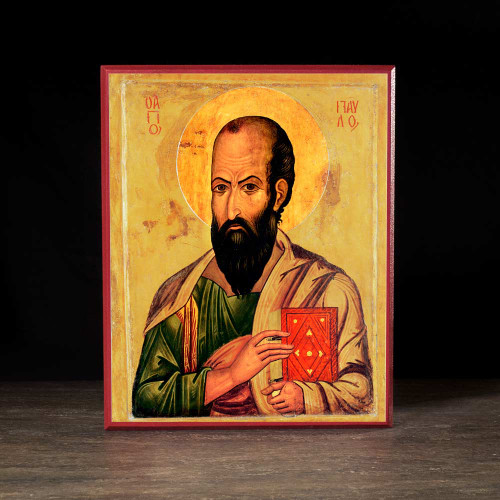 This 13th century icon from Mount Sinai depicts Saint Paul, a chief of the Apostles and defining evangelist of the early Church.

Originally named Saul, Paul was a Jew and a Pharisee. He was a leader of Christian persecutors, and was responsible for the stoning of Saint Stephen, a deacon and the first Christian martyr. When traveling to Damascus to persecute the Christians there, Christ appeared to Paul in glory and chose him to be a key figure in the development of the Church. Paul was baptized and spent three years in the desert, receiving the Gospel by divine revelation. He was scrutinized by the Apostle James, the bishop of Jerusalem, and the Apostle Peter, and was finally sent out to preach.

Saint Paul wrote numerous epistles and started numerous churches on his three missionary journeys, including the Church of Antioch, where we were first called Christians. For his work, Paul is considered perhaps the single most important and influential person in the beginning of the Church.

He was eventually arrested. As a Roman citizen he appealed to Caesar and was allowed to live under house arrest. About AD 67, during the persecutions of Nero, the holy Apostle was martyred by beheading. He and Saint Peter are celebrated together as the Chiefs of the Apostles on June 29.