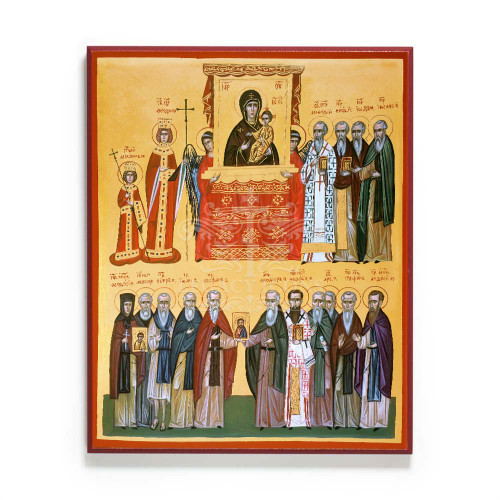 The Feast of Orthodoxy (also knowns as the Sunday of Orthodoxy or the Triumph of Orthodoxy) is celebrated on the first Sunday of Great Lent (six Sundays before Pascha) in the liturgical calendar of the Eastern Church. The Feast is kept in memory of the final defeat of Iconoclasm and the restoration of the icons to the churches.

Despite the teaching about icons defined at the Seventh Ecumenical Council in 787, the Iconoclasts began to trouble the Church again. After the death of the last Iconoclast emperor, Theophilos, his young son Michael III, with his mother the regent Theodora, and Patriarch Methodios, summoned the Synod of Constantinople in 843 to bring peace to the Church. At the end of the first session, all made a triumphal procession from the Church of Blachernae to Hagia Sophia, restoring the icons to the church. This occurred on 11 March, 843 (which that year was the first Sunday of Lent). The Synod decreed that a perpetual feast on the anniversary of that day should be observed each year on the First Sunday of Great Lent, and named the day, "the Sunday of Orthodoxy".

The name "Orthodoxy" has gradually affected the character of the feast. Originally commemorating only the defeat of Iconoclasm, the commemoration has gradually come to be understood in a more general sense as opposition to all heterodoxy. In this way, though its first occasion is not forgotten, the feast has become one in honour of the true Faith in general. This is shown by its special service.