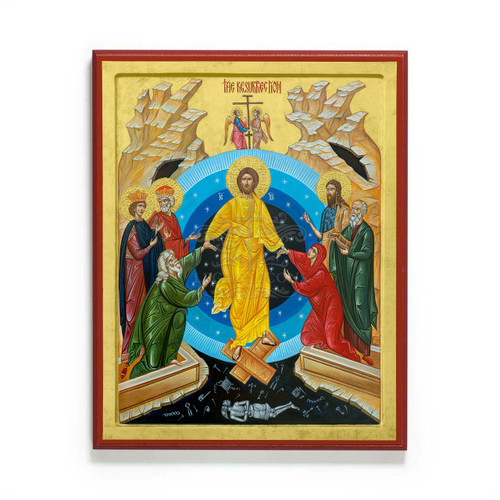 On the third day after His death, the Sunday of Pascha (Easter), our Lord and God and Savior Jesus Christ raised Himself from the dead. This icon celebrates the universe-transforming event known as the Harrowing of Hades, the doctrine laid down in the Nicene Creed. In His spirit, the Lord descended into Hades, the realm of the dead. But death, being unable to hold Him Who is Life, was rendered powerless, and Christ raised the dead to eternal life.

In the icon, Christ is standing on the gates of Hades. He destroyed these ancient gates that had held all the dead captive. He is reaching down to Adam and Eve, our first human ancestors, pulling them from the grave. David, Solomon, John the Baptist and Righteous Noah represent all the kings and prophets who had gone before, foreseeing this great event. At the top, two Angels lift up the Cross as a symbol of victory; below, an old man representing Death itself is tied up, for Christ "has led Captivity captive."

The Resurrection is the feast of feasts, the season of seasons, in which we praise Christ for this glorious action that made our union with God possible.

This icon was painted by our friend Georgi Chimev.