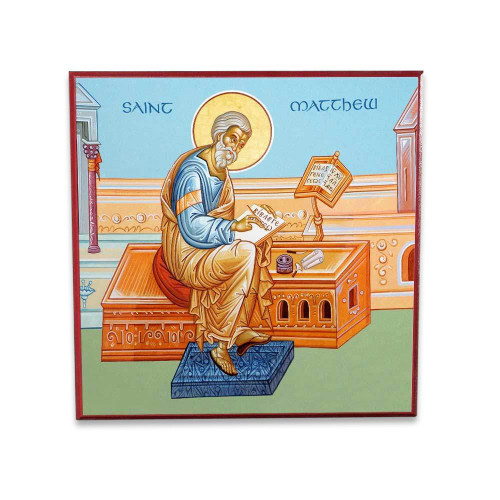 Matthew the Evangelist was also called Levi. As one of the Twelve Apostles, he witnessed the works and miracles of Jesus, and is traditionally held to have described those in the Gospel of his name eight years after the Ascension.

When he was called to be an Apostle, Matthew was working as a tax collector. Jesus’ choice to befriend a tax collector, which was seen as a sinful profession, surprised many people, but it taught Jesus’ lesson of forgiveness and acceptance.

After Pentecost, St. Matthew spent his ministry in various places, and is thought to have written his Gospel in Antioch between ad 50 and 70. He was martyred in Ethiopia.

The Gospel of St. Matthew shows a deep understanding of Jewish law and tradition. Matthew’s focus was on how Jesus, with His coming, fulfilled and reinterpreted these traditions in a new way.

The icon of St. Matthew shows him in the process of writing his Gospel. His paper and writing tools are laid out on the table beside him. Like the other Evangelists, he writes in Greek, the original language of the New Testament.

His feast is celebrated on November 16.