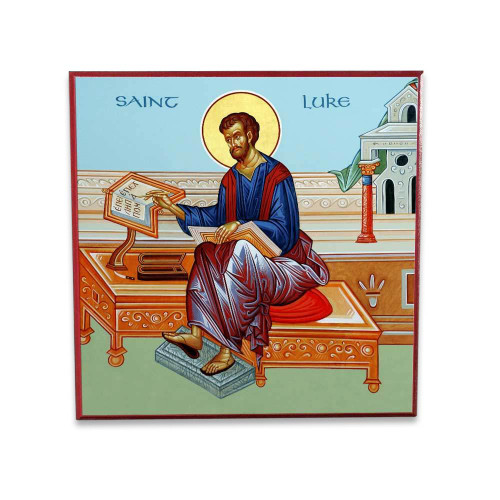 Like St. Mark,  St. Luke was not one of the Twelve Apostles, but was one of the the four Evangelists. He was a Gentile, not a Jew, born in Antioch. He was a physician by profession.

Luke became a disciple of St. Paul and traveled with Paul and Peter throughout the Mediterranean. Under Paul’s supervision, he wrote his Gospel about 15 years after the Ascension. As Luke had participated in the building of the early Church, he described those events in the Acts of the Apostles, which he also authored.

He was an early Gentile Christian. His Gospel is written to show that salvation through Jesus Christ is universal and open to all people, not only the Jews. The Gospel of Luke is also concerned with historical accuracy and carefully notes when events took place.

Besides writing his Gospel and the Book of Acts, Luke evangelized in another very important way. He is said to have painted images of Mary the Theotokos, and of Sts. Peter and Paul. He can be called the first iconographer, and our icons today are based on his first paintings.

St. Luke died a natural death at the age of 86 in Achaia in western Greece. His feast is celebrated on October 18.