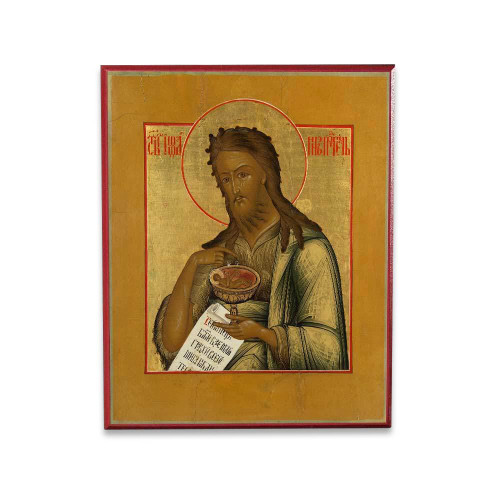 The Glorious Prophet, Forerunner, and Baptist John was the older cousin of our Lord. He was born miraculously of his aged parents, specially chosen by God to prepare the way for Christ, the Messiah. It was John who identified Jesus as "the Lamb of God Who takes away the sins of the world." After he baptized Christ in the Jordan River, John was arrested by Herod and beheaded at the request of his wicked wife and daughter.

Christ called John "the greatest man ever born," and so his image is very prominent in Orthodox churches. He usually appears beside Christ on the iconostasis, or standing in prayer near Him, opposite the Theotokos. There are several feast days dedicated to Saint John throughout the year.

This 19th century icon was painted in Russia. Saint John is holding what appears to be a chalice, but is actually a diskos, the plate which holds the sacred Bread at the Divine Liturgy. The Bread, which is called the Lamb, becomes the body of Christ. This is a literal depiction of this sacred moment. As Saint John pointed the way to Christ in his earthly ministry, through this icon he points the way to the most awesome way in which we encounter Christ today.

His scroll reads, in Slavonic, "Behold the Lamb of God Who takes away the sins of the world."