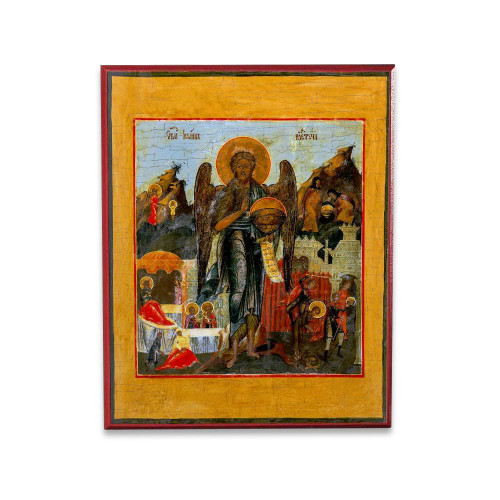 The Glorious Prophet, Forerunner, and Baptist John was the older cousin of our Lord. He was born miraculously of his aged parents, specially chosen by God to prepare the way for Christ, the Messiah. It was John who identified Jesus as "the Lamb of God Who takes away the sins of the world." After he baptized Christ in the Jordan River, John was arrested by Herod and beheaded at the request of his wicked wife and daughter.

Christ called John "the greatest man ever born," and so his image is very prominent in Orthodox churches. He usually appears beside Christ on the iconostasis, or standing in prayer near Him, opposite the Theotokos. There are several feast days dedicated to Saint John throughout the year.

In this 19th century Russian icon, there are several important scenes from his life. In the bottom left corner, we see Saint John's birth and presentation in the temple. In the upper left, an angel leads a young John into the wilderness (according to Church tradition, this occurred after his father Zacharias the high priest was killed in the Temple and his mother Elizabeth died). In the lower right is his martyric Beheading, and in the upper right is the Finding of his venerable head. In the center, Saint John gives a blessing while holding the platter with his head. He is depicted with wings as a messenger (angelos) of God.