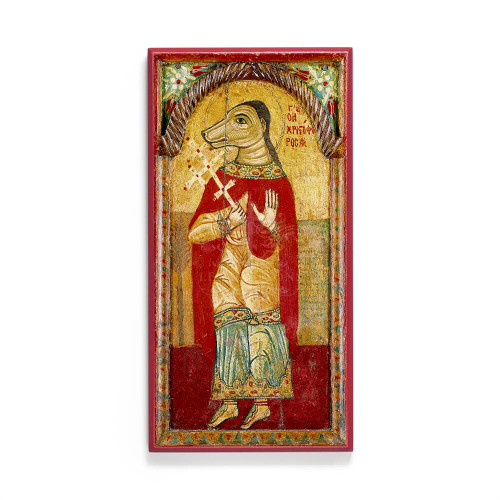 Saint Christopher was an early martyr, suffering for Christ about the year 251. His feast is celebrated on May 9 in the Orthodox Church, and he endures as one of the most well-known and venerated saints throughout the world.

The depiction of a dog-headed man is an ancient feature of iconography with somewhat obscure origins. The term "dog" is used throughout the scripture in association with foreigners, having been used even by Christ Himself. Some icons of Pentecost included dog-headed men, which are meant to symbolize the ultimate foreigner, furthest away from Christ, who also were brought into the Church. Icons exist which depict the Apostles preaching to dog-headed people for the same reason. The depiction of Saint Christopher in this way ultimately points to a belief in all nations combing to be Christ-Bearers (Christophers).