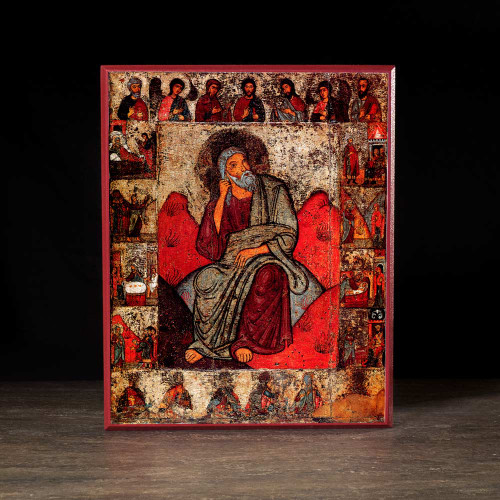 Elijah (or in Greek, Elias) lived under the rule of Ahab, “who did evil before the Lord, more than all who were before him” (3 Kgd. 16:38). Through Elijah, God gave the world a voice of justice in an unjust time. But the miracles and signs worked through Elijah prefigure those Jesus worked during His life.

Leaving Israel to be humbled in a state of drought, Elijah followed God’s command to sojourn by the Brook Cherith, where he was miraculously fed, like the Israelites were during their exodus from Egypt. Later, God directed Elijah to the house of a poor widow, who in reward for her hospitality and faith was told that her “bin of flour shall not be used up, and the jar of oil shall not run dry, until the day the Lord sends rain on the earth” (3 Kgd. 17:14). This miracle parallels Jesus’ multiplying a small number of loaves and fishes to feed a hungry crowd. Elijah also, by the name of the Lord, restored the widow’s son to life—just as Jesus was later to restore more than one child, and adult.

When he returned to Ahab, upon God’s promise of rain in Israel, Elijah was made able not only to denounce the bad king but also to bring back some of those who Ahab’s reign had led astray. By publicly presenting signs from God—including a mingling of fire and water that illustrates the purifying power of Baptism—Elijah brought a group of confused Israelites back to true belief. Jesus’ signs and works had the same effect on many of His witnesses.

At one time, when Elijah feared for his life, he retreated into the desert for forty days and was sustained by God on very little food. Jesus underwent the same period of seclusion and fasting shortly before his death and Resurrection.

Elijah, though, was not actually to die. He was shown signs by God that renewed his faith, and some time later, after Ahab had been killed, a new king installed, and Elisha named as Elijah’s successor, he was taken up to Heaven by a whirlwind in a chariot of fire. While this does not equate to Jesus’ ultimate Ascension to Heaven—Elijah did not ascend by his own power—the similarity is a sign in itself.

Elijah is depicted as an ascetic, a sojourner in the wilderness. His sandals, brown tunic, and green hair-lined cloak represent the simplicity and spirituality found in the retreats of the earth.

This 13th century icon depicts the Prophet Elijah (or Elias) contemplating in the wilderness, with scenes from his life and other saints on the border. Its rich color scheme features deep scarlet tones, grays, creams, and purple. The Prophet is commemorated on July 20.