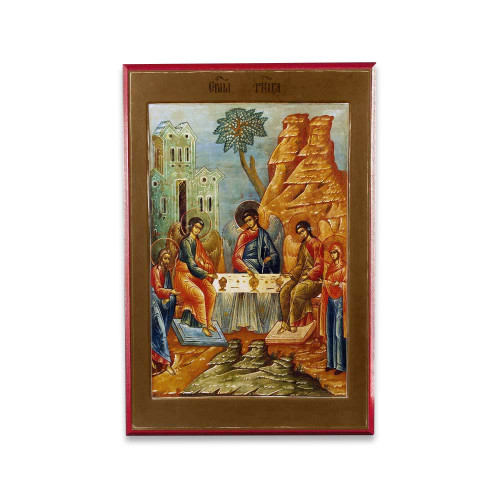 This icon is used in the Russian tradition for the feast of Pentecost, and in many churches it appears above the Holy Doors. It bears two meanings.

On its surface, this icon depicts a scene from the Bible. The image of three angels grouped around a food-laden table is understood to illustrate the story of the Hospitality of Abraham (Gen. 18:1-8). Here Abraham had just been told by God that he and his wife, Sarah, though beyond childbearing age, were to be blessed with a son. Shortly thereafter, Abraham greeted three men—messengers from Heaven, but also guests in their own right and entitled to good treatment—who appeared on his doorstep. Abraham did all he could to make his holy visitors comfortable, and with Sarah’s help served them from the best provisions he could offer. The guests confirmed Abraham’s blessing. Consistent with a Scriptural interpretation, they are portrayed as angels.

Second, while the icon does show the three messengers seated at Abraham’s table, icons like this one have come to be understood throughout Church history to be representations of the Holy Trinity, present even in the Old Testament covenant God made with Abraham.

It is not necessary, though, to identify each angel in the icon as the Father, the Son, and the Holy Spirit. Different versions of the icon may reconcile the question by different means—in some, one angel is clearly identifiable as the Son, and in others, which emphasize the unity of the three Persons of the Trinity, all three angels are identical.

Other icons, make the angels both united and unique. Sometimes the eyes of each angel are focused on the companion sitting to his right. The lines of their gazes form a triangle suggesting that, despite their separateness , they are united in one existence. Their placement above the Holy Doors, through which Holy Communion is brought out during the Divine Liturgy, furthers their connection to God’s becoming incarnate for our salvation and being present today in the Eucharist. The angels, unified around the feast, are partaking of Holy Communion themselves.

Also, while the three are otherwise identical to one another, they are clothed in different colors: one in red, one in blue, and one in green. These colors all have divine significance: red for active power and sacrifice for God’s purpose, blue to the contemplative depths and mysteries of God’s love and presence, and green for the peace and regeneration brought forth in communion between God and ourselves. The three colors, in both their meanings and appearance, complement and balance one another. Here balanced are the opposite tones of red-orange and blue, and midpoint in green: here is present the God who smote Sodom and Gomorrah, the God willing to have mercy on either city for the sake of one just citizen, and the God who delivered a child and heir to an aging couple long after they had accepted this was impossible; and, while we may not be able to pinpoint which figure is which, here are represented the Father, the Son, and the Holy Spirit.