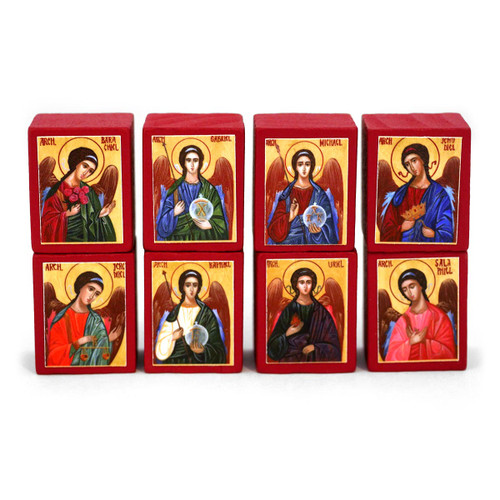 This beautiful icon set includes the eight traditional Archangels, the leaders of the bodiless hosts of heaven. Inspire your mind with spiritual thoughts as you contemplate their intercession for you and your loved ones.

Michael in the Hebrew language means Who is like God? He is the leader of the Archangels, and has been depicted from the earliest times as a commander and protector of the Church. In this icon he holds a spear and an orb, which represents authority. The Greek letters in the orb, AXK, mean Archangel of the Lord.

Gabriel in the Hebrew language means Man of God or Might of God. He is a bringer of good news of the mysteries of God, especially at the Annunciation to the Virgin Mary. He holds messenger's staff, rather than a soldier's spear, and an orb, which represents authority. The Greek letter in the orb, X, means Christ.

Raphael in the Hebrew language means Healing of God or God the Healer. One of the eight traditional archangels, he is named in the book of Tobit, where he restores sight to the blind. He holds a staff and an orb, which represents authority. The Greek letters in the orb, IC, mean Jesus.

Uriel, whose name in Hebrew means Fire of God or Light of God, is one of the eight traditional Archangels. He holds a flame of fire, referring to his name.

Salaphiel (also translated as Salathiel) in the Hebrew language means Intercessor of God. One of the eight traditional archangels, he is named in the book of III Esdras, where he encourages the Prophet Esdras. His hands are crossed in a gesture of humility and prayer.

Jehudiel (also translated as Jegudiel) in the Hebrew language means Glorifier of God. One of the eight traditional archangels, he is depicted holding a golden crown and whip. He is considered to be a patron of leaders and those in positions of responsibility.

Barachiel in the Hebrew language means Blessing of God. One of the eight traditional archangels, he is depicted holding roses. He is considered to be a leader of the Guardian Angels, and a patron of married couples and families.

Jeremiel (sometimes called Ramiel) in the Hebrew language means God's Exaltation. One of the eight traditional archangels, he is depicted holding scales of justice, which relates to his traditional role as the angelic overseer of Hades, or the place of the dead ("Bosom of Abraham"). Before the Resurrection of Christ, he was considered the comforter of the departed souls of the righteous, and in Christianity, the guide of faithful souls to heaven. He is also depicted as one who inspires the faithful with Godly thoughts.

Micro Icons are tiny, miniature icons that are currently available with six different images. At a size of 1x¾", they can be placed virtually anywhere to bring the sacred into daily life—computer monitors, bookshelves, window sills, and even car dashboards.

They make excellent gifts, and could be used for rewards for students, and a host of other uses. Micro Icons are produced using the same museum-quality process as our other icons.

Note: Do not give Micro Icons to very young children, as they may be a choking hazard. Please also keep in mind that Micro Icons are sacred images and should be treated as such—they are not toys.