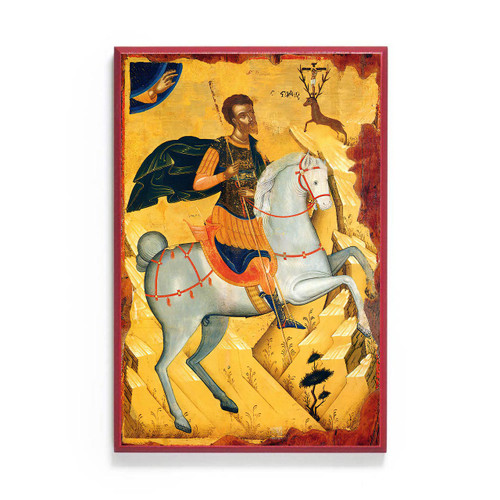 Saint Eustathius (Eustace, Eustathios) was born in the late first century and was named Placidus. He was a famous general during the reigns of Emperors Titus and Trajan.

While out hunting one day, he was pursuing a stag. The Lord caused a vision of the Cross to appear to him between the stag's antlers, and a voice commanded him to be baptized. So Placidus presented himself to the local Christian priest and was baptized with the name Eustathius, along with his wife and two sons. Afterwards, he returned to the place of his vision and gave thanks. The voice returned, telling him that he would suffer for Christ. Eustathius took his family into hiding in Rome, but while traveling, his wife and sons were abducted, and Eustathius settled in the village of Vadisis.

When Trajan was defending the Empire against the barbarians, he was grieved that his skilled general was missing. He sent two officers to find him, and by God's providence, they quickly did. They compelled Eustathius to lead the army, which he successfully did. While returning to Rome, Eustathius found his family and brought them with him.

Arriving in Rome, Eustathius learned that Trajan had died and Hadrian was now on the throne. When he appeared before the emperor, Eustathius was summoned to lead the victory celebration and offer incense to the Roman gods. He refused, and declared himself to be a Christian. He was then arrested with his family and tortured. They were thrown to be eaten by the wild beasts, but they did the martyrs no harm. Finally, they were cast into a red-hot metal vessel shaped like an ox. Three days later, their dead bodies were removed, although they appeared to be totally unharmed.

These martyrs suffered in the year 118. Their feast is celebrated on September 20. This icon, an example of the Crete school, dates to the 16th century.