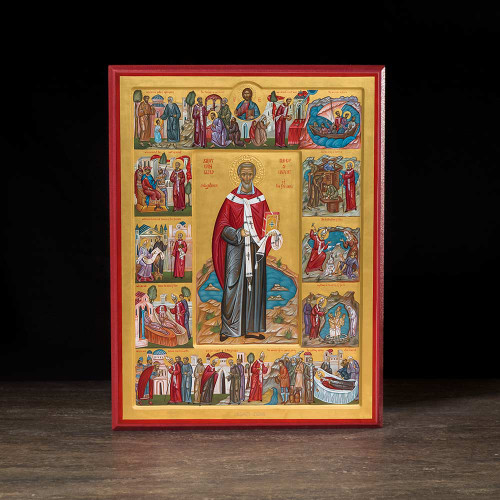 Saint Willibrord was the first missionary to the Low Countries, in particular the Frisians in the north of the Netherlands.

Born in Northumbria (northern England) in 658, he entered the monastic life at a young age following the death of his mother. He was talented and zealous, and desired to help in the missionary efforts that were spreading into northern Europe. He and several Irish monks traveled to Frisia about the year 690, and preached throughout the land. Willibrord was consecrated as the first bishop of Utrecht, and despite the opposition of Radbod, the king of the Frisians, he managed to convert many to Christ. He worked many miracles, which are recounted in the Life written by Saint Alcuin of York, a contemporary of Saint Willibrord's. Later in life, Willibrord established a monastery in Echternach (now Luxembourg), where he continued to preach. He reposed peacefully in 739 at the age of 81. To this day his sacred relics rest in the Abbey of Echternach, where a sacred spring flows.

By his intercessions, Saint Willibrord has continued to work miracles throughout the centuries. In the Middle Ages he became known as a healer of epilepsy. He is also considered to be a patron saint of Luxembourg and the Netherlands, as well as Dutch and Frisian people around the world. This stunning icon features 14 scenes from St. Willibrord's eventful life.