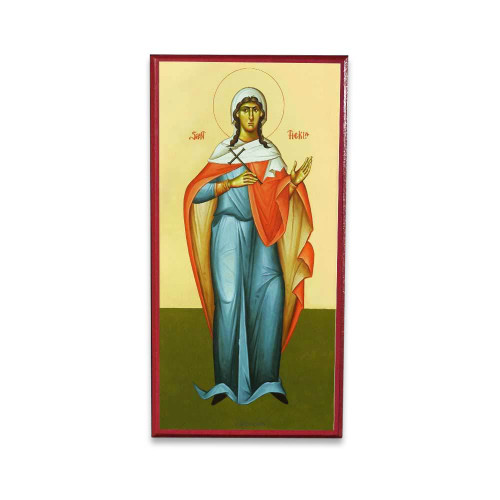 Saint Thekla (or Thecla) was born into a pagan noble family just sixteen years after the Ascension. When she was eighteen, against the wishes of her mother and fiancé, she became a disciple of St. Paul. Despite the objections of her family and the government, Thekla remained steadfast in her new faith. She faced public execution, but was saved and even baptized miraculously. After she gave all the wealth she had to Paul to aid his ministry, Thekla went to live an ascetic life in the wilderness.

Throughout her life, she suffered greatly for Christ and supernaturally escaped martyrdom on several occasions. At the age of 90, followers of the goddess Artemis went to defile Thekla. She cried out to the Lord, and the earth split open to hide her; she gave up her soul.

Though she did not die a typical martyric death, for her sufferings the Church has given her the title of Protomartyr (first martyr), and for her work of evangelism, she is called an Equal-to-the-Apostles. Her feast is celebrated on September 24 (September 23 in the West; October 3 by the Copts).

This icon was painted by Athanasius Clark.