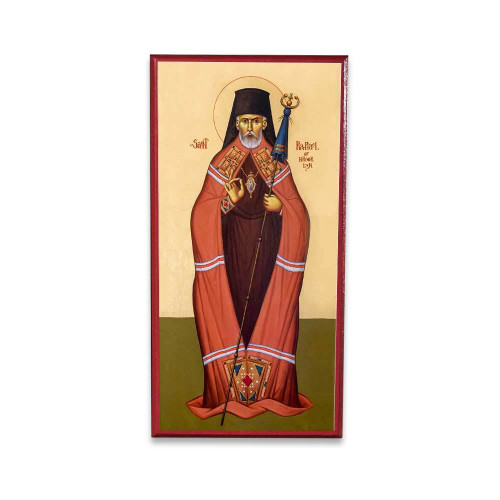 Saint Raphael was born in Beirut in 1860. He spent the first decades of his life traveling throughout the Middle East and Russia, gaining knowledge and experience as a clergyman. Father Raphael was called to America and established a parish in Brooklyn, serving Orthodox immigrants and encouraging their faith. He was later elevated to the episcopacy, becoming the first bishop consecrated in America. He continued his tireless work among the Orthodox faithful, along with evangelism efforts, until his repose in 1915.

He has several major feast days: February 27, the date of his repose; May 29, the date of his glorification; and in the Church of Antioch he is also celebrated on the Saturday before November 8.

This icon was painted by Athanasius Clark.