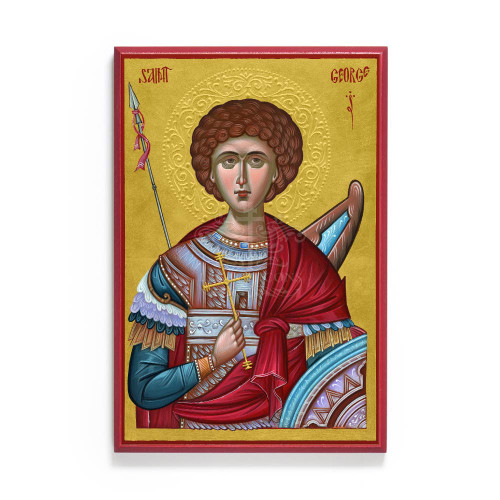 Saint George, sometimes called “the Trophy-bearer,” was born in the province of Cappadocia, Asia Minor (Turkey), in the third century and raised as a Christian. About age 20, he joined the Roman army under the emperor Diocletian, and soon showed himself to be a skilled and talented soldier. He rose in the ranks of the military, and the pagan government became uneasy that a Christian held such a position of power.

In the year 303, the Emperor Diocletian commanded that all soldiers offer sacrifices to the Roman gods. George publicly refused, declaring he was a Christian and would worship Jesus Christ alone. George's father was a high-ranking officer, and Diocletian privately tried to persuade George to change his mind. When he refused, the emperor handed him over to unimaginable tortures, and George held fast until the end. His body was returned to his home town, and the Christians there immediately began to venerate him as a martyr.

A soldierly act that St. George is traditionally known for is his fight with a dragon. A story is told that the city of Beirut was under siege by a vicious alligator or python, that preyed on citizens and livestock alike. The daughter of the governor was chosen by lot to be sacrificed to the creature. On the night she was left outside the city walls to satisfy its hunger, St. George was called on to destroy the creature, and succeeded. This represents the triumph of God and goodness over evil and the devil. The dragon is oftentimes depicted as trying to trip George’s horse with its tail, as temptations to evil threaten to trip us from the right path. St. George, uniformed as the Roman officer he was, is seen rising above and conquering it. An angel is usually shown crowning him as a martyr, and the scene takes place in the wilderness just outside the city of Beirut.

Still counted among the greatest martyrs, Saint George is venerated by nearly the entire Christian world. His feast is celebrated on April 23.