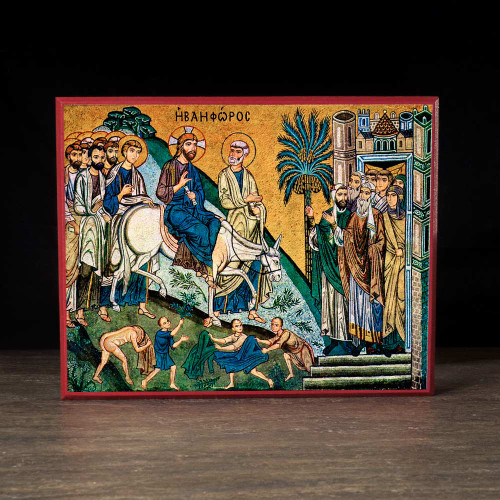 Palm Sunday is the celebration of Christ's triumphal entry into the royal city of Jerusalem. Riding on a young donkey, he was met by a massive crowd who publicly hailed Him as king. They waved palm branches and laid their cloaks on the road before Him as they shouted: "Hosanna! Blessed is He Who comes in the Name of the Lord, the King of Israel!" This event occurred the day after the Lord raised Lazarus from the dead. He made many enemies during His ministry, and the celebrations of this day quickly gave way to His Passion and death, as the same crowds would turn against Him.

This radiant 12th-century mosaic is from the Palatine Chapel in Palermo, Sicily.