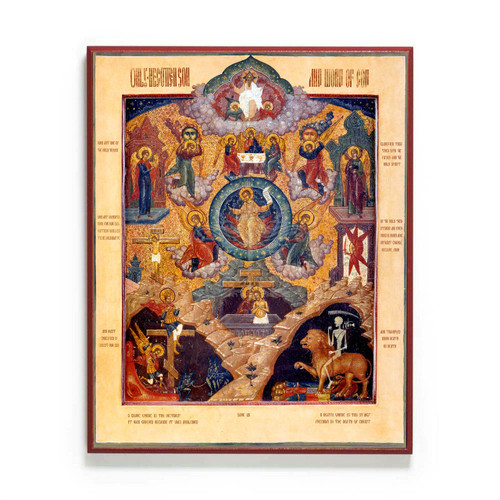 This 18th century Russian Old Believer icon is based on the "Hymn of Justinian" that is sung in the Divine Liturgy:

Only-Begotten Son and Word of God; who art immortal; who for our salvation willed to be incarnate of the Holy Theotokos and Ever-Virgin Mary, and without change became man, and wast crucified, O Christ our God, and trampled down death by death; who art one of the Holy Trinity, glorified together with the Father and the Holy Spirit: Save us!

The various scenes of this icon illustrates this ancient hymn of praise to the Lord Jesus Christ.

As an instructional icon, we have painstakingly replaced the Church Slavonic inscriptions with English ones, so it can be understood by all.

Above the center is the Old Testament Trinity, or Hospitality of Abraham, and above this, Christ depicted as the Lord of Sabaoth. On either side, angels hold the sun and the moon, which represent His dominion over all creation.

In the lower half, there are three depictions of Christ and the Cross. On the left side, Christ hangs on the Cross overlooking Jerusalem, as the Gospel describes. In the middle, the Theotokos weeps for her Son as He is taken down from the Cross and buried in the tomb. In the lower left corner, Christ is depicted as a conquering King as He enters into Hades, where the demons recoil in fear. On the right side, a skeleton riding a lion represents the power of Death, who holds the souls of the departed captive. But Christ he King is about to set them free by His Resurrection.