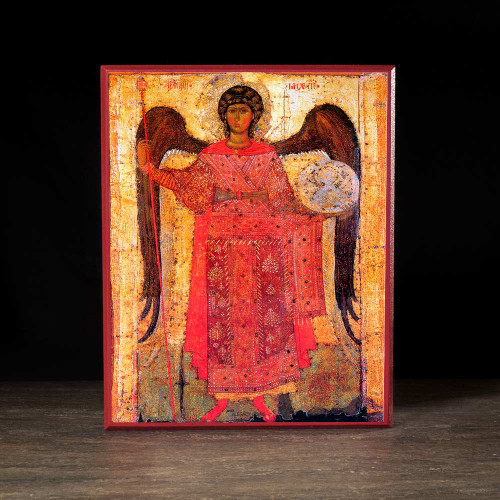 An angel is a messenger of God, and a being which has stood before God and praised Him from a time before human comprehension. We cannot fully grasp what an angel's exact nature is, but we can understand an angel's function on earth. In icons, angels—especially the high-ranking Archangels—are depicted in an earthly form. All the angels are dressed as humans, in clothing accented with gold, the color of holiness and Heaven.

The Archangel Michael is the warrior of God, and in any given instance of heavenly warfare is likely present fighting for Him. In icons, Michael can always be identified by his soldier's attire, his armor, and the sword he wields. Also, Michael is frequently clothed in some shade of red. The color red can symbolize power, war, blood, and sacrifice: all appropriate to the angel who is engaged in warfare. His liturgical hymns refer to him as "the Commander of the bodiless hosts." He holds a flaming sword in one hand, a reference to the angel who guards the Garden of Eden in the book of Genesis, and an orb in his other hand, symbolizing his authority as the supreme Archangel.