Homilies on the Beatitudes 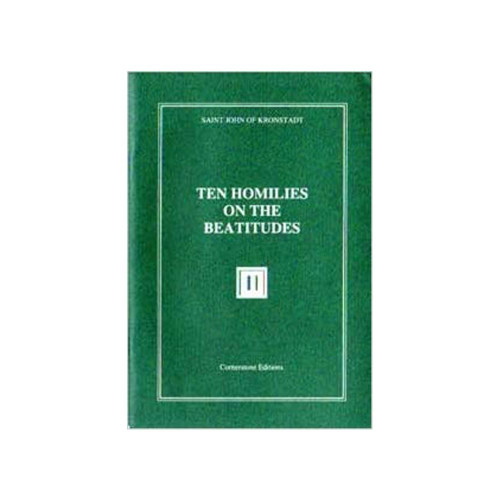 Homilies on the Beatitudes

Saint John (Father John Sergiev) of Kronstadt (1828-1909) is one of the best-known modern Russian saints. His classic chronicle of the spiritual life, My Life in Christ,, was translated into English and French at the beginning of the twentieth century. Despite the interest St. John sparked during his lifetime and in recent scholarship and theology, however, many of his sermons and essays remain unknown outside their original Russian. This translation of The Homilies on the Beatitudes is meant to introduce the English language reader to a fundamental, hitherto neglected, part of the saint's work.

This work dates from St. John's early period, when he was known primarily in Kronstadt and its environs. St. John appears here still as a local parish priest, intimately concerned with the life and behavior of his immediate flock; he is not yet the famous healer, political commentator, and philanthropist he would become in only a decade. We have little surviving material from this period (1858-1880), when St. John was engaged in the day-to-day work of charity, prayer, and asceticism that would eventually earn him the gifts of healing and wonderworking. The Homilies are thus of interest both as a document chronicling the first steps of a saint towards holiness before broad recognition and acclaim, and also as a text which is hardly accessible, even in its original.

The text's interest, however, lies beyond its rarity. For students of St. John, The Homilies are useful precisely for the links they allow one to make between his early works and his later, better-known ones. Such themes as charity and the sacraments, for example, can already be identified as being among the saint's central and pervasive concerns, appearing as early as 1869 and worked out by him to the end of his life.

The Homilies also constitute a link between St. John's diaries, preserved in Russian archives—only a minuscule portion of which is contained in My Life in Christ—and his sermons. If the Homilies are compared with the notes St.John made in his diaries at the same time, for example, certain phrases and even entire sections are reproduced word for word. Wherever possible, this book will note such parallels, referring the reader to the original source. For the Homilies are the public expression of St. John's private thoughts... As a side-by-side reading of the diaries and the Homilies shows, St. John would first note an idea privately, then ponder on it and present it for public use in the form of a sermon. His works demonstrate that the boundary between public and private for a saint and a priest could be quite porous.

Because The Homilies were, as the name suggests, originally delivered as sermons, they give the reader an unusually close sense of the impact of St. John's physical presence and his spoken word. His using examples that would have been familiar to his audience, his structuring each homily to remind the listeners of the previous week's lesson, his frequent exclamations of Brothers!,all heighten the sense that this was an oral presentation, and that both speaker and listeners inspired each other with their own fervor.

...But above all, the Homilies are an invitation to the Liturgy. St. John's preaching genius, which eluded those of his contemporaries who tried to identify it, comes through eloquently here. By concentrating on a simple and basic text, which he notes is read or chanted every day, he illuminates the entire Divine service.

...Far from being a detached, moralizing meditation on the Gospel, in short, St. John's Homilies on the Beatitudesare a document to uniquely Orthodox teachings, practices, and even calendar days, testifying that to him the Gospel's lessons could be apprehended only in the context of Orthodox liturgy. Reading The Homilies brings us closer both to St. John and the Orthodox Church he loved and served.