In addition to bringing you the highest quality icons, Legacy Icons is committed to fostering a culture that has its saints in flesh and blood, not just wood and paint. To help make this a reality, our new blog will post articles covering spirituality, the liturgical calendar, art history, patristic wisdom, and other food for thought. In this article, Sam Granger (our "web-deacon") analyzes the icon of the Dormition and how its fast can help us appreciate the season as we begin the end of summer.

Depending on the year, June often waffles between feeling like spring and feeling like summer. Here in Michigan, June's a capricious month, with cold rain some days and dog-day heat other days. But with July, spring has fully passed. The days are long, hot, and humid. Summer fruits and vegetables ripen. And after all this time, we're finally mustering the courage to take a not-so-frigid dip in Lake Michigan. It's hard to believe after all this time waiting for a season to mature, pretty soon the cicadas of August will siren its end.

We're beginning the end of summer, of our liturgical calendar, and the life of the Theotokos. The word "august" has a host of synonyms—"respected," "celebrated," "impressive," "venerable," "consecrated"—all of which apply to the Dormition. If we want to appreciate this season, we'll need to first appreciate this feast.

Three days before her falling asleep, the Archangel Gabriel announced to Mary that her mortal life was coming to a close. Her final desire was to see all of the apostles before her repose. The Lord fulfilled her wish and all the apostles, borne by angels in the clouds, gathered at the same time in the home of St John in Jerusalem.

After she saw all the apostles gathered around her, the Lord came to the Theotokos. She peacefully gave up her soul to God without any pain or physical illness. Her body emitted an aromatic fragrance and, in the company of many Christians, she was carried to the Garden of Gethsemane and the sepulcher of her parents, Joachim and Anna. There she was entombed in the company of all the apostles.

...Except Thomas. He was "characteristically" absent. When he arrived three days later, he demanded that the tomb of the Theotokos be opened so he could pay his last respects to the Mother of our Lord. So the apostles opened the tomb only to find the burial linens of the Theotokos while her body was gone. That evening the Theotokos appeared to the apostles surrounded by a myriad of angels and said to them, "Rejoice, I will be with you always."

The icons for this feast set the scene at the solemn but joyous moment of the Virgin's repose or "koimisis." From this word for "falling asleep" or "dormition" we get the word "cemetery" (κοιμητήριον), and there's certainly the somber celebration of a life one often finds at a wake. Rather than echoing the anguish and loss of the icons of the Deposition of Christ in the Tomb, these icons recall the triumph seen in icons of the Ascension. In both icons, all the apostles are gathered around the Theotokos while her Son is radiantly present above her.

The icons for this feast all have a sense of fellowship, gratitude, and reconciliation. This moment of pause comes at a time when the early Church had a lot on its plate: the Herodian persecutions (Acts 12:1-3), decisions needing to be made in the Council of Jerusalem (Acts 15), disagreements between apostles (Gal 2:11), a famine in Judea, various pastoral and theological concerns, and the daily struggle that comes with dying to oneself to live in Christ. Amid all this, the apostles set "set aside all earthly cares" to be brought together for the death of the beloved Mother of God. 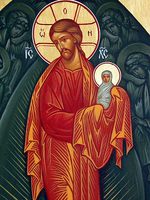 The death of a loved on tends to put things into perspective. In the case of this icon, the perspective is rather paradoxical. The Old Testament readings for this day are turned on their head: "The Gate of Heaven" enters into Heaven (Eze 43:27-44:4). "The Ladder of Jacob" is lifted by angels in its ascent (Gen 28:10-17). Wisdom tells its House that there is a place prepared for it (Pro 9:1-11). But the icon's most striking reversal is this: now it's the son who cradles his mother.

But just as he resembles his mother, the mother bears a resemblance to her son. Like him, her tomb is also empty and her body also gone when the apostle open the tomb. Thomas' absence again leads to a revelation of God's wondrous work. And her parting words to the apostles echo the words of her son when he said, "Lo, I will be with you always, even unto the end of the age" (Matt 28:20). In both life and death, the same story is found in Mother of God and the Son of God.

That the world-saving Maiden died is no marvel,
Since, after the flesh, the world’s Maker died also.
God’s Mother liveth forever, though she died on the fifteenth.

-Stichoi from the Synaxarion for the Dormition 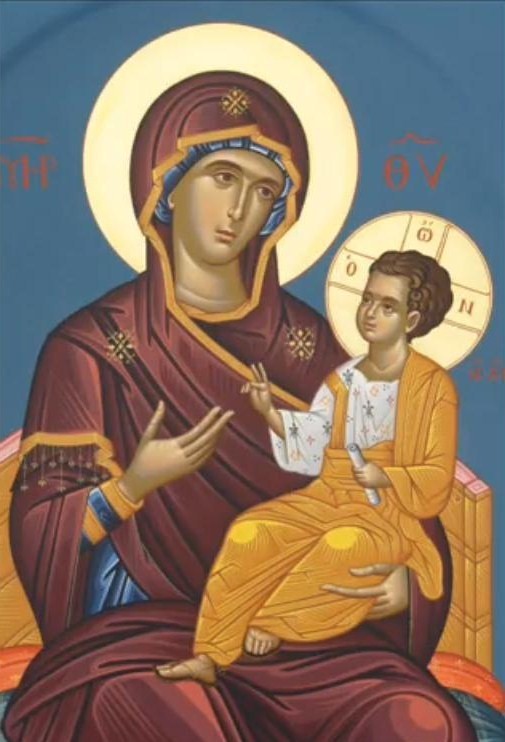 The liturgical calendar always invites us to give thanks (εὐχαριστία, "eucharistia") for all that God is and all that God does in our lives. The Dormition fast is an opportunity to reflect on this. As the sun begins to set sooner and the summer months come to their close, let us learn to appreciate this abundant season before it's gone. But above all, let us emerge from this fast more grateful for our God who cares for those who are devoted to Him even until their last breath.

For the Dormition Fast, we're offering all our blog readers a coupon code for 20% off our Theotokos and Dormition icon collections: Just enter DORMITION20 at checkout.

Expires August 31, 2016. Limit one use per customer and one coupon code per order.